Yep yep, monday we were went to Subang autosurf for match with px team. 1st round was gg by px team but win at the second round . Had yumcha session after game and dota was the main topic during yumcha session and reached home at 1.30 pm.

Was decided not to cooked at wednesday but when i buying tomatoes that goin to make juice for alanz, i was attracted by the yummy~ cabbage(luv it so much~). So, at last i make up my mind to cook for da day. Reach home around 5pm after work, prepare ingredients for cook, and have dinner at around 6 pm. Usually alanz's dad will eat dinner with us but today he went for a speech about spine. Bought lotsa tomatoes for juice , at da same time also needed for my ABC soup. Soup for today was really huge bowl because alanz luv to drink it and same to me =). After dinner , stil left half a bowl in kitchen and we can reboil at night and finish it. Take a lil' nap (2 hours =P) , wake up at 8pm becoz have match at this time. Ok, today have a funny joke happen and the lil`conversation was goes like this :

(We 2 were sitting in front the computer while waiting for players join dota. Suddenly , a smell come to our room.)

alanz : wei, u smell something?...so nice the smell likes someone is baking bread.
shirley : ya meh? ( at 1st i have da same thinking as alanz but soon i realise...)wei i smell something is burned la.

shirley : Watz !!
(we quickly run to kitchen. Know wat happen? The soup was all dry and pot was burned)

alanz : just now i was reboil the soup and i forget @@
shirley : wth, i reboil edi why u reboil it again?
alanz : i want the soup hotter ma =(
shirley : Ya ! now hotter but not the soup is Me!!

Actually was really angry him so forgetful but when i saw his regretful face...pity face...was feel like laughing. Luckily the kitchen is not on fire if not wouldn't know watz will happened *_*. But the pot was spoil, burned into so dark and can't be use anymore. 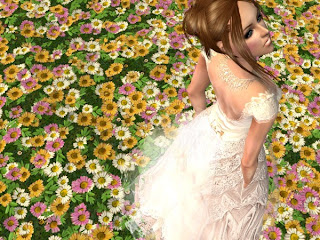 
Love this picture alotz. The character in the picture was created by bonnie who was my favourite sims 2 story writter. Story write by her was touching, funny sometimes, excited and mostly all picture taken by her was so nice and feel good ^_^. Especially this 1 make me feel wanna marry and wear wedding dress =D
Posted by Shirley (Meiz) End @ 9:59 am